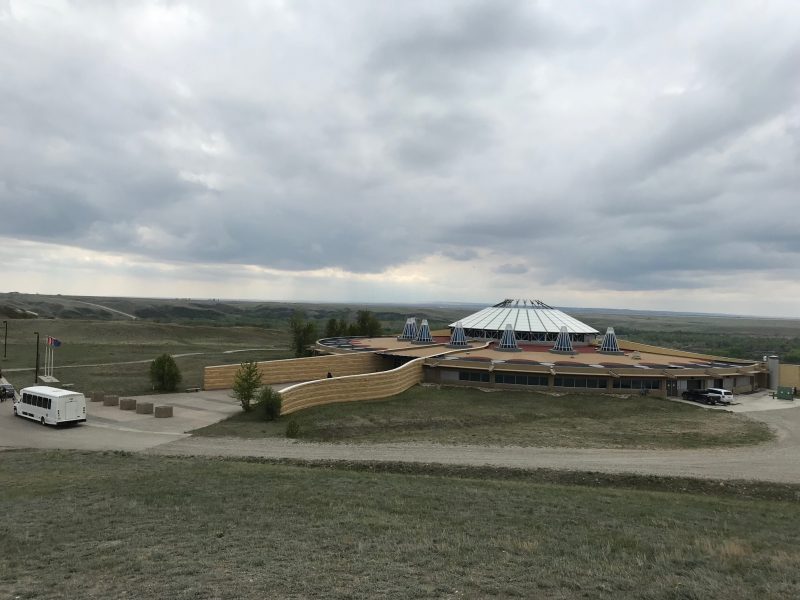 On May 25 members of the Historical Society of Alberta descended on Blackfoot Crossing to attend the HSA annual general meeting.

A national heritage site, Blackfoot Crossing was the location of the signing of Treaty No. 7. The beautiful building is home to a museum and conference facilities, and is set within a breathtaking landscape rich in archaeological resources. It was a perfect location for the AGM, and a bus from downtown Calgary chartered for the occasion made it easy to get to.

Before the AGM, Dr. Linda Many-Guns gave a very interesting presentation on the impact of colonialism on the Siksika Nation. After the AGM volunteers from the Archaeological Society of Alberta were on hand to speak to attendees about the site. Although we were supposed to explore the site outside, a mother black bear and her cub had other plans, so we stayed inside and looked out over the landscape while looking at artifacts the ASA volunteers had with them.

One of the highlights of the AGM was the opportunity to speak with like-minded individuals from across Alberta who are as passionate about preserving our history as I am. All five chapters of the HSA were represented: EDHS, Lethbridge, Chinook (Calgary), Red Deer, and the Peace Country. There was also a member of the Alberta Historical Resources Foundation (a major funder of the HSA) present. Dr. Lindsay Amundsen-Meyer is a Calgary-based archaeologist and was a delight to converse with: we spoke about history, archaeology, and the role and benefits of the HSA and its chapter organizations.

Although the location for next year’s AGM is not yet set, I suspect it will be closer to Edmonton, and hopefully more members of EDHS will be able to attend – it is certainly worth the effort!