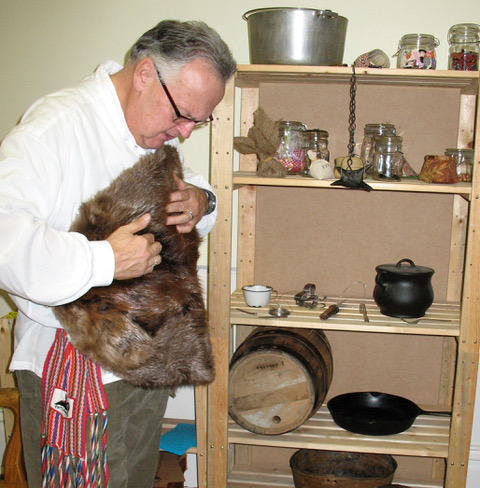 EDHS has received some sad news. Due to health reasons, Jim Higgs, our instructor for History in the Classroom, has announced his retirement. The confusion over how schools will handle covid-19 in the fall added to Jim’s predicament, as there’s currently no guarantee that his presentations would have been permitted in “closed” classrooms.

Jim has been the centre of History in the Classroom. His career with EDHS began in 2007 at Queen Alexandra School where EDHS had set up the top floor of the century-old school as “the History Centre.” Jim was one of the primary teachers at the Centre and when it lost Edmonton Public School funding and moved to Fort Saskatchewan in 2012, Jim continued to work as one of the main teachers there.

Prior to the school year in 2014, EDHS received a generous gift (via the Edmonton Community Foundation) from the Phyllis Arnold Learning Centre (PALF). The funds from the donation were to help EDHS promote education programs in teaching history to schoolchildren.  From these plans, EDHS offered a new program in 2015 for History in the Classroom entitled “Beavers, Beads and Pemmican.”

Jim Higgs has presented to thousands of students during the past five years.  The evidence is shown by the fact that teachers, who registered online to book his sessions, regularly completely filled the calendar before the end of June for the next school year.  That meant those trying to register in September were usually put on a waiting list, hoping some bookings might get cancelled. If one does the math, Jim did two presentations for a class of 30 students each day, for three days a week, for five years – until the schools closed in March due to covid-19. That’s an estimated 27,000 students!

Jim’s popularity among students and teachers was unsurpassed. EDHS has received many emails and phone calls since April from teachers wanting to register their classes for presentations during the school year 2020/21.  We know that hundreds of students and teachers will be sad to hear of his retirement.  Please feel free to send Jim your best wishes and many thanks for his unique, entertaining and knowledgeable presentations over the past five years.

You are much appreciated, Jim, and EDHS is forever grateful for your contribution to teaching history to thousands of children and their teachers.  You will be greatly missed!