In Person At Last!- A Fine John Rowand Evening!

While the pandemic has kept us apart for the past two years, the technology of Zoom online video meetings has brought us together. Although members of the Edmonton and District Historical  Society have been able to attend meetings on video with their computers in the comfort of their homes, they were obviously eager to meet in person!

That was apparent in the season-ending dinner meeting at the University Club, formerly known to us as the Faculty Club, at the University of Alberta. Over 70 people gathered there for the annual John Rowand Night to enjoy a fine dinner prior to the evening program. It was the largest attendance at an EDHS meeting since the pandemic struck. What a pleasure it was to meet again in person. 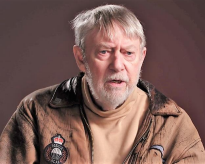 A screenshot of Denny May’s appearance in the film Blind Ambition: The Wop May Story.

Famous aviator Wilfrid “Wop” May and his son  Denny were commemorated in the evening’s program. John Chalmers spoke first, with a PowerPoint show that illustrated Denny’s involvement in recording, sharing, and preserving the  history of his father. Wop died on a hiking trip with Denny in Utah in 1952 when Denny was only 17 years old.

One example of Denny’s extensive work in documenting his father’s career is his book, More Stories About Wop May. For the past few decades, Denny was involved in the history of his father’s career in aviation, which started when Wop flew as a  fighter pilot in the First World War. Post-war he flew as a  barnstormer, bush pilot and commercial pilot. During the Second World War, Wop May served as manager of No. 2 Air Observer School of the British Commonwealth air Training Plan, where navigators were trained  for the RCAF and air forces of other Commonwealth countries. The school operated from the  wartime hangar that is now the home of the Alberta Aviation Museum.

Next speaker was Tom Robinson, co-director and  writer of the new film, Blind Ambition: The Wop May Story. The 22-minute film made its debut at the Edmonton International Film Festival in October 2021. An indication of the success of the 22- minute film is that it picked up two awards at the Festival. Blind Ambition was recognized with Audience Choice Award for Best Short Documentary and the Jury Award for Best Documentary Short.

Tom spoke about how the film came to be produced and how Denny May was involved in its production. Historic film footage, dramatization, animation, and re-enactment all contribute to the production.

Sadly, Denny died the day before the film was to be shown at the Festival, and he never got to see the final production. Nevertheless, Denny’s presence was felt, as he appears in the film, speaking about his father’s accomplishments.

In attendance at the meeting was Denny’s wife, Marg. Marg thanked the EDHS for their interest in preserving and sharing the history of Wop May and the involvement Denny has had in it. He has donated many of Wop’s artifacts to various archives and museums, including the Alberta Aviation Museum.

Following the presentations were the door prize draws for books that let winners have their choice, an event not possible with online Zoom meetings during the pandemic! A dozen or  more books went to the lucky ticket holders.

President Christine Prokop then chaired the Annual General Meeting that concluded with election of board members headed up by incoming president Kelsey Kendrick. Serving also will be vice-president James Klassen and treasurer Sabrina Lali. The  position of secretary still remains open. Anyone wishing to serve in the post can contact info@historicedmonton.ca to let your interest be known.

Others serving as directors are Maggie Bodnar, Brett Lamoureux, Owais Siddiqui, Cadence Bergman, Sophie Gareau-Brennan, Taylor Haugen, Matthew Olson and Marina Power. Despite the difficulties caused by restrictions due to the pandemic, the EDHS has finished the season in good shape, with enthusiasm for the  months ahead that was clearly seen at John Rowand Night.