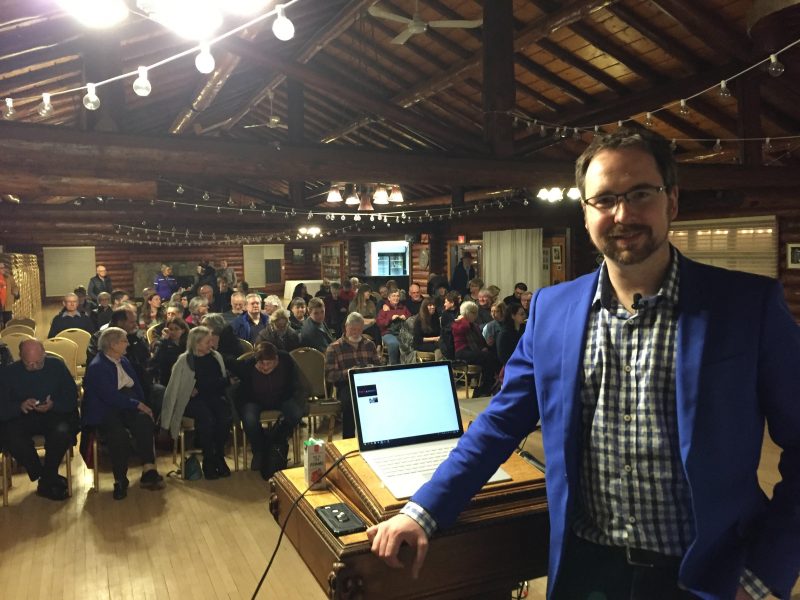 On Tuesday, January 28th, another healthy crowd of EDHS members and history buffs joined us at the Old Timers’ Cabin, this time for Matthew Dutczak’s presentation, “Best Edmonton Mall.”

Matthew, a “self-appointed mall historian,” started looking into the history of West Edmonton Mall some years ago as a hobby, and has indulged his amateur interest to an impressive degree since. He did a great job presenting to a live audience, considering his usual forum is YouTube.com (check out his “Best Edmonton Mall” channel here). Matthew naturally offered some video clips, which feature historic media and promotional footage of the mall, stitched together by his own in situ recollections.

Not only did he take the audience through the many developments and attractions of WEM over the years (including the tragic roller coaster accident in 1986), he placed the mall in its historical context, pointing out how a city of 500,000 ended up having the world’s largest shopping centre thanks to the single-minded vision of the Ghermezian family.

He also reminded his audience that August 5, 1981, saw the opening of Edmonton’s biggest, most glamorous mall ever: Heritage Mall, on 23rd Avenue and 111th Street. It was the toast of the town – at least until West Edmonton Mall opened, 42 days later.

While Heritage Mall disappeared thanks to a changing retail landscape and its fatal proximity to Southgate (its footprint is now the very open parking area at Century Park), WEM has survived and even inspired successors. Once the world’s largest mall, bar none, WEM today is not even in the top 20.

It was an evening of history that many in the audience could easily, and fondly recall. Thanks, Matthew!