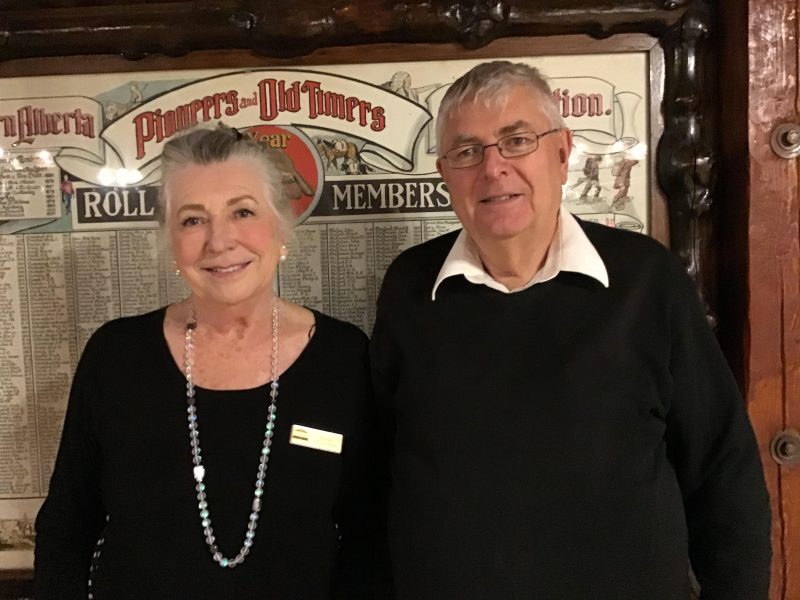 On Tuesday, September 24, EDHS held its first Speaker Series presentation of the 2019-20 season in our new home, the Old Timers Cabin. As a fitting salute to this beautiful venue, Dorinda Emery, Executive Director of the Northern Alberta Pioneers & Descendants Association (NAPDA), started the evening off with a brief history of her organization and their magnificent building.

NAPDA was formed in 1894 as the Edmonton Old Timers Association. Membership was limited to those whose origins in Edmonton predated the railway’s 1891 arrival.

Initially more of a social club, NAPDA has evolved over its 125 years into an organization that welcomes all, and is dedicated to collecting and preserving stories and documents of Alberta’s pioneers, for current and future generations.

NAPDA opened the Old Timers Cabin in 1959. A genuine log cabin, the building was assembled by master builder Hobart Dowler entirely without the use of nails or screws. The lovely, surprisingly large structure hosts more than 200 events per year and is one of Edmonton’s favourite wedding venues.

Following Dorinda’s history, NAPDA President Roy Bird gave a very engaging presentation on his own family. Roy’s great, great grandfather, an Englishman named James Curtis Bird, joined the Hudson’s Bay Company around 1789, aged 15, and travelled to “Rupert’s Land.” His “country marriage” to a Cree woman named Mary Oo-Menahomisk was, like all such marriages, a major advantage in Bird’s expertise and eventual success in the business of the fur trade. Bird even acted as the HBC’s Governor of all Rupertsland in 1817-18.

James Curtis Bird’s grandson, William Bird Jr., grew up in the fur trade, becoming a trapper for the company. Nevertheless, he looked beyond the walls of Edmonton House to the region’s agricultural potential. He built the area’s first flour mill on Stony Creek in 1871. As it turned out, the creek’s flow proved inadequate at peak harvesting times, causing Bird to abandon it after three seasons. Yet the structure was not forgotten: we remember it every time we use Stony Creek’s modern name – Mill Creek.

Thanks to Dorinda and Roy, it was a great evening of Edmonton history in one of Edmonton’s most charming landmarks.